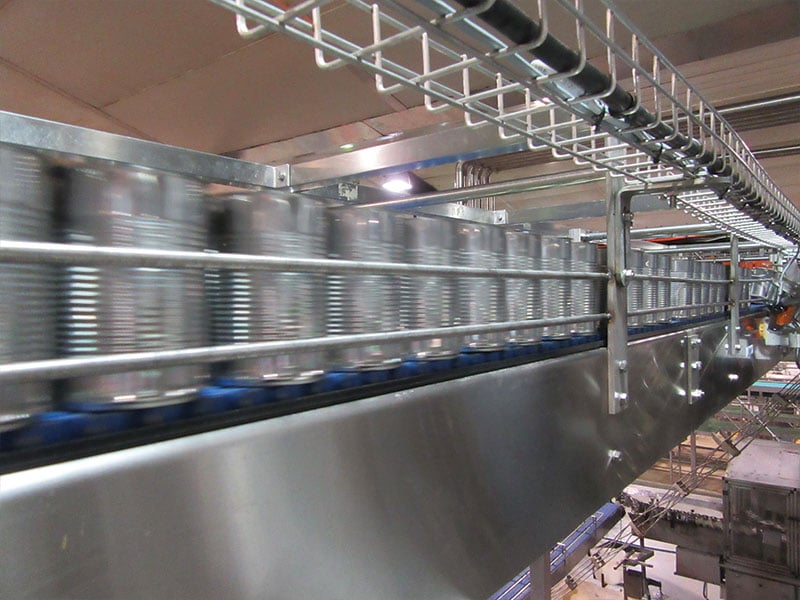 January 2017 – NEPTEK supply RHODES FOOD GROUP in the Limpopo Province of South Africa with an empty can conveyor system from the existing de-palletising machines to the filling machines. The system consists of three slat chain conveyor lines running overhead from the warehouse feeding onto an accumulation modular belt carousel inside the factory. The accumulation modular belt carousel allows empty cans to prime the discharge chutes to the filling machines and build back cans when the filling machines stop for any reason allowing for buffering on the line. The complete conveyor system was constructed from stainless steel for hygienic purposes with polycarbonate removable covers to prevent dust, dirt and debris from falling into the empty cans before filling.

NEPTEK also supplied the line control using SIEMENS PLC with variable speed drives to control the motor speeds for ramping up and down depending on line requirements. Timing on the installation was of the essence as the client only had a limited period during their annual shutdown at the end of the year to complete the installation. Through careful planning and working quickly on-site NEPTEK was able to fulfil the deadline set by the client and have the system up and running when the plant started up in the new year.

At Neptek we focus on fully understanding our clients’ requirements and provide solutions that will add value to your business.

We partner with our clients from the beginning and believe your success is our success and see every client as a long-term relationship of growth, trust and support.